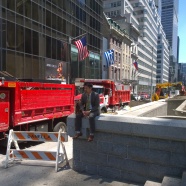 Posted by eponymous on October 9, 2018 in Uncategorized | Leave a comment

I was invited to give a lecture about my music videos at the University of Kentucky by the department of Musicology and Ethnomusicology, as part of the Year of Migration series.  Below are the notes from that lecture, entitled “The Return Home”.

The General Arc of the Second Half:

Popular Culture and the Return Home:

People From Other Cultures:

What I Think About When You Say South Korea:

← Proposal: The Expenditures Limit on Indie The Academic Standard for Publication of Music →